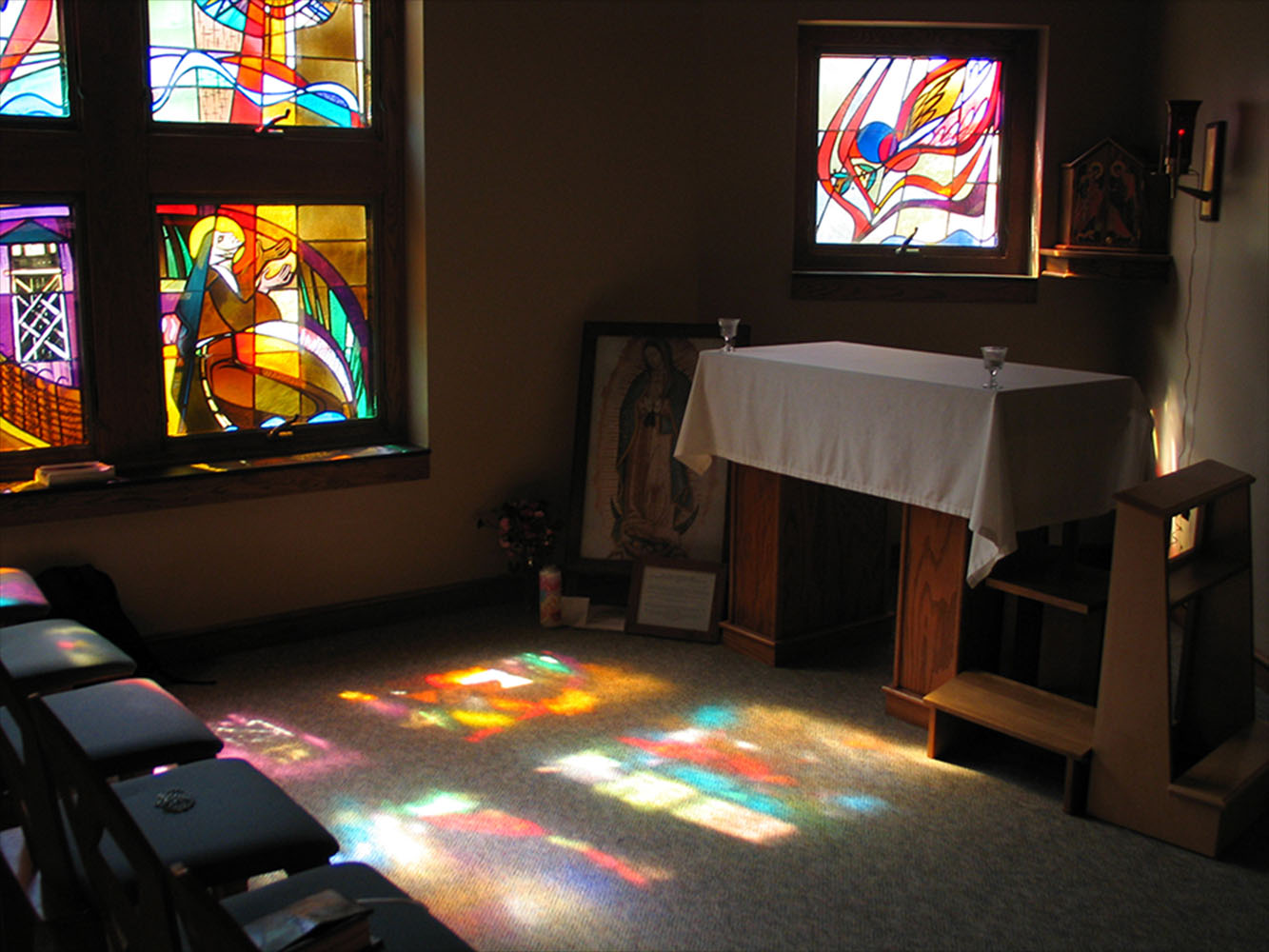 The Spirit moves us to prayer when and where he wills, at all hours of the day, in any and all places. Sometimes this means a deep desire to visit Our Lord midday, or in the quiet dark of night. It’s a blessing then, that nearly all residence halls at Franciscan University have a chapel where the Blessed Sacrament is reserved so students have a convenient place to pray.

The presence of the Blessed Sacrament is greatly respected, with many students lowering their voices as they pass by and pausing to genuflect.

Located on the ground floor at the intersection of two hallways, the Marian Hall Chapel is the center of both the physical residence hall and the spiritual life of the nearly 200 women of Marian Hall. Every day at all hours, someone can be found praying there—a household reciting the Rosary, an all-hall Mass, RAs leading night prayer, or a few women reflecting quietly.

The chapel in Marian Hall feels earthy and homey. There is wood paneling around the altar, and lights directly above the gold-colored tabernacle often serve as the only illumination. An image of Divine Mercy and a statue of Our Lady of All Nations stand nearby. A window to the left is open during the warmer months, letting in a cool breeze.

The women of Marian Hall have taken upon themselves the task of supplying fresh flowers every week. They support each other by praying for their neighbors’ intentions and worries, which are placed in a box in the back of the chapel.

In the craziness of college life, it is important for a student to have a safe refuge to rest their soul in the presence of the Blessed Sacrament. Providing that steady anchor for the men of Trinity Hall is Our Lady of Sorrows Chapel.

Located on the ground floor, the chapel seats up to two dozen people. A stone wall stands behinds the tabernacle, and a chapel is graced with a large painting of Our Mother of Divine Grace. Stations of the Cross in the shape of the San Damiano Cross decorate the walls.

Frequently visited by members of the Priestly Discernment Program also living on the ground floor of Trinity Hall, Our Lady of Sorrows Chapel hosts bi-weekly hall Masses organized by various households, and other events such as SENT empowerment nights and spiritual talks coordinated by resident assistants.

Our Lady of Guadalupe Chapel, located on the second floor of St. Thomas More Hall, serves as a spiritual center to the nearly 300 women who live in the largest women’s residence hall on campus. Standing outside the door is a statue of Our Lady of Guadalupe, reminding passing students to reverence the Blessed Sacrament.

Comfortably seating around 40 people, the chapel is used every day by the women of the hall for quiet personal prayer, household commitments, or hall Masses.

The tabernacle is tucked into a small alcove to the right of the altar, and a statue of St. Thomas More, patron of the hall, is on the left. Stations of the Cross line the walls, and a large bookshelf stocked with spiritual books is set next to a window overlooking a grassy hill.

Located on the first floor of St. Francis Hall, the San Damiano Chapel is a quiet spot to pray for the nearly 140 men who live there. An image of St. Francis made to look like stained glass decorates the door.

The chapel’s bold red walls are a similar color to the rich red found in the San Damiano Cross that hangs above the altar. Colorful stations of the cross circle the room that seats nearly 20 people. A large painting of Our Lady of Guadalupe stands next to the altar.

In addition to private prayer and commitments organized by the many households of St. Francis Hall, the men living there pray for each other and loved ones who have died, their names recorded in a book by the door.

One of the smaller residence hall chapels, Immaculata Chapel’s limited floor space is made up for by its tall, sloped ceiling. Opposite the entrance, a striking stained-glass window depicts SS. Kolbe and Clare kneeling in adoration toward the Blessed Sacrament. Two brightly colored angels are painted on the tabernacle. Next to the door stands a statue of the Immaculate Heart of Mary.

Open to the 90 women of St. Clare Hall and the 45 men of St. Kolbe Hall, Immaculata Chapel seats 12, with large cushions lining the walls, giving extra seats on the floor.

The largest residence hall chapel can be found at SS. Louis and Elizabeth Halls. A large chapel window overlooks the campus and lets light in to the spacious and bright room. Behind the altar, another window depicts the San Damiano Cross.

Located on the third floor, the chapel can seat over 50 people and is available to the 116 women of St. Elizabeth Hall and the 62 men of St. Louis Hall for a Mass held every other week, weekly praise and worship, and household and personal prayer.

Located on lower campus, the Mary, Star of Evangelization Chapel is the main sanctuary of worship for members of the Priestly Discernment Program.

Three large windows fill the room with natural light, which creates an open and bright environment. Gold and wooden stations of the cross line the white walls. On the left of the altar is a first-class relic of St. John Vianney. On the right of the altar is an icon of Mary, Star of Evangelization. Below the icon sits a book in which members of the PDP can write intentions, along with intentions received by the PDP Office.

During the school year, the Blessed Sacrament is present at all times, as PDP members stop in for prayer or their holy hour. Every afternoon, the PDP prays the evening Liturgy of the Hours in the chapel. On Thursdays, the men have benediction and adoration, and every Sunday, the PDP director celebrates Mass for men in the program.