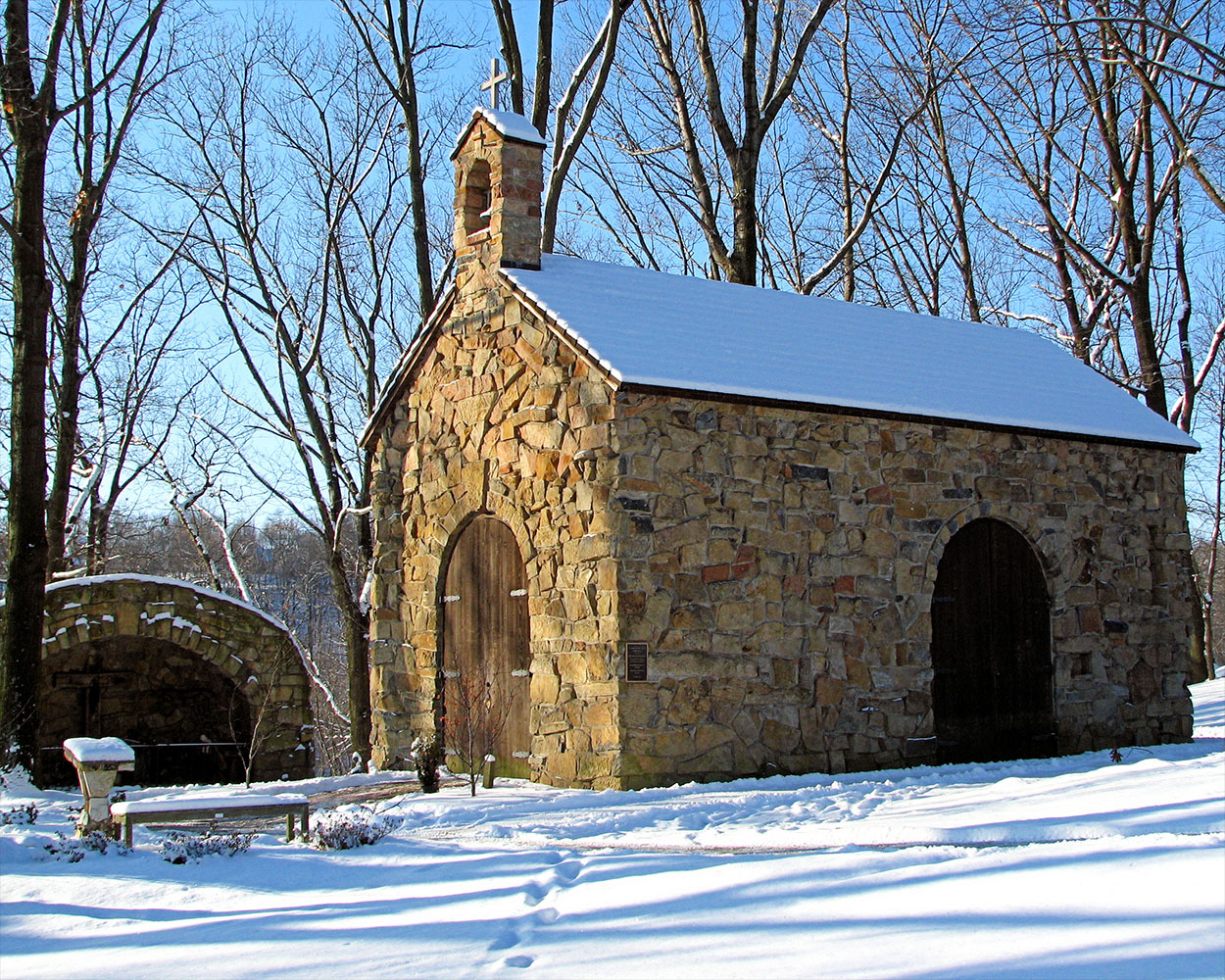 When Saint Francis heard those words from the mouth of the Lord, speaking through the San Damiano crucifix in a small, dilapidated church, he took them to mean simply rebuilding that little church outside Assisi. It was in the Portiuncula that he founded the Friars Minor; there that he clothed Clare in the religious habit and began the Order of Poor Clares; and there that Francis yearly gathered the friars in chapter to discuss the rule and renew their dedication to the Gospel life. And it was at the Portiuncula where St. Francis died in 1226.

That first tiny Portiuncula, a holy place and the center of St. Francis’ activity, is recreated here on Franciscan’s campus as a grace-filled haven for quiet meditation and eucharistic adoration. Nestled in a grove of trees opposite Christ the King Chapel, the Portiuncula beckons students and visitors alike to “come and spend an hour with the Lord” in prayer.

This small chapel completed in 1987, like St. Francis’ 13th-century original, has become a place of adoration, conversion, and prayer. The simple beauty of the small stone structure reverberates with the power of the Lord’s presence. The stillness, imbued with the peace of the Lord’s tender concern, draws visitors in and focuses attention on the eucharistic Lord.

The Portiuncula is open daily from 8 a.m. to 8 p.m., except during the school year when perpetual adoration begins and it is open 24/7.

At the beginning of each semester, students sign up for a weekly holy hour commitment, and once all slots are filled “The Port” is open for continuous eucharistic adoration, 24/7, except during breaks. Be sure to check the Chapel Bulletin for any exceptions.

By decree of the Vatican, the Portiuncula is designated a site of holy pilgrimage, and the fiathful can receive a plenary indulgence on five occasions throughout the year. To obtain the plenary indulgence, the faithful should devoutly visit the Portiuncula Chapel, where they pray for the intentions of the Holy Father including the Our Father and the Creed, in addition to meeting the Usual Conditions:

These must be completed within 7 to 10 days before or after the visit to the Portiuncula.

The days on which the plenary indulgence may be obtained are:

The Portiuncula is mainly reserved for quiet prayer and adoration. Vocal prayer is not encouraged in the Portiuncula itself. However, nearby sites,such as the Marian Grotto, Tomb of the Unborn Child, Créche, and hillside Stations of the Cross are available for vocal prayer.

Requests for reservations of the Portiuncula such as special Masses or weddings are very rarely approved. All requests must be brought to the Office of Chapel Ministry.