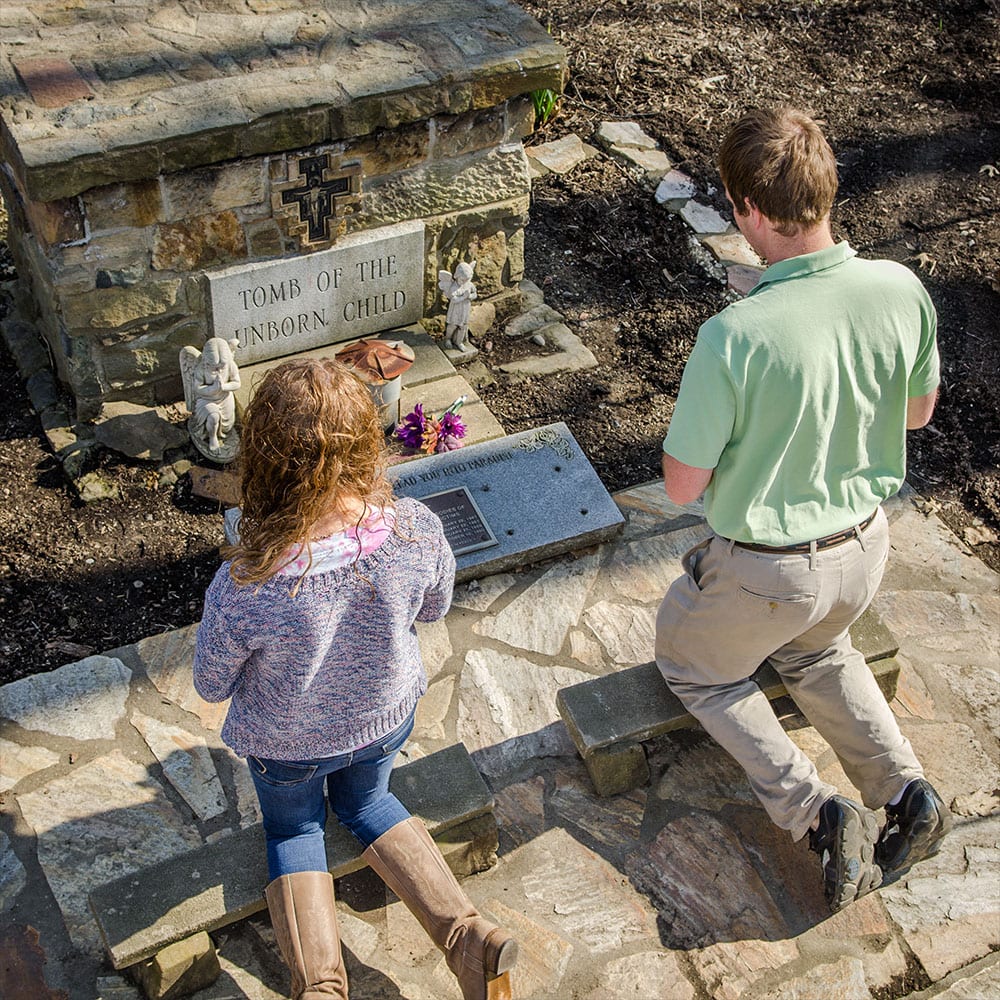 Set across from the Portiuncula Chapel, the Tomb of the Unborn Child serves as a peaceful place to pray for infants in the womb, expectant mothers, those healing from abortion, and all the vulnerable of the world.

The tomb is also a constant reminder of the innumerable lives lost to abortion, as it contains the remains of seven aborted children: Francis and Clare, interred January 22, 1987; Agnes, interred January 21, 1989; Jeremiah, interred October 10, 1990; Michael, interred September 29, 1995; and Andrew and Joseph, interred November 20, 1998.

The tomb is guarded by a perpetual flame and encircled by a stone patio and wooden benches, with two granite kneelers at its base. A rough-hewn stone crèche a few yards away also reminds visitors of the need to protect the most vulnerable, including the unborn.

The tomb serves as a beacon of prayer for students and visitors alike. It is not uncommon to find rosaries, flowers, religious medals, and hand-written prayers placed with care beneath the tomb’s monument.

During the school year, the Franciscan University Students for Life Club prays a Rosary at the tomb on Wednesday evenings at 9:00 p.m.

History of the Tomb

While waiting for a flight at an airport in 1986, Mike Marker, former director of the Human Life Center in Steubenville, conceived the idea for a tomb. “It must have been the Holy Spirit,” he later said.

Marker brought the idea to Father Michael Scanlan, TOR, then-president of the University.

With Father Mike’s permission, work on the tomb began in the late 1980s, side-by-side with the construction of the Portiuncula Chapel.

Thanks in part to Marker, the tomb and the Portiuncula’s exterior share the same rock, accentuating the prayerful atmosphere of the adjoining spaces.

On a snowy January 22, 1987, the 14th anniversary of the U.S. Supreme Court’s Roe v. Wade decision that summarily struck down all laws against abortion across the country, over 500 people processed from Christ the King Chapel to witness the entombment of two babies killed by abortion. The infants, given to the University for proper burial, were named Francis and Clare.

Two years later, on January 21, 1989, Agnes, aborted at 13 weeks, was buried in the tomb at the conclusion of the annual Pro-Life Memorial Service. The next year, a child given the name Jeremiah was laid to rest on October 10 after a memorial service. Since Jeremiah’s interment, three other victims of abortion have been buried in the tomb.

Cardinal O’Connor and the Knights

In April 1992, John Cardinal O’Connor, archbishop of New York (1984-2000), prayed at the tomb while attending a pro-life conference at the University. He later said, “I have never been more deeply touched than to stand by that little shrine with the flame in front of it . . . . This can be another spark to raise the spirits and consciousness of the people in the pro-life movement and those who have thus far been resistant.”

Later that year, at the opening Mass of the 110th Annual Supreme Council Meeting of the Knights of Columbus at St. Patrick’s Cathedral, Cardinal O’Connor charged the Knights to build and maintain a “tomb of the unborn child” at every Catholic cemetery. These sites, primarily memorials and not tombs, would compel thousands of visitors to reflect that “the unborn put to death by abortion was as much a human being as all the others buried there,” Cardinal O’Connor said.

Mother Teresa, who was also in attendance at that opening Mass, urged all present to pray that every child in America, born and unborn, would be loved, and to pray for mothers tempted to kill their own children.

The Knights soon passed a resolution urging state councils “to establish and maintain in at least one Catholic cemetery in every diocese in which the Order is presented, a permanent Tomb of the Unborn.”

By December 1999, more than 1,835 monuments had been erected by the Knights in the United States, Canada, the Philippines, Mexico, Guatemala, Guam, and Puerto Rico.

In late 2006, Franciscan University’s Tomb of the Unborn Child underwent renovations, primarily funded by the Franciscan University Student Association, to make it a more accessible and attractive place to pray for the victims of abortion. A new stone patio resolved problems with flooding around the tomb, while landscaping added to the area’s atmosphere of peaceful reverence.