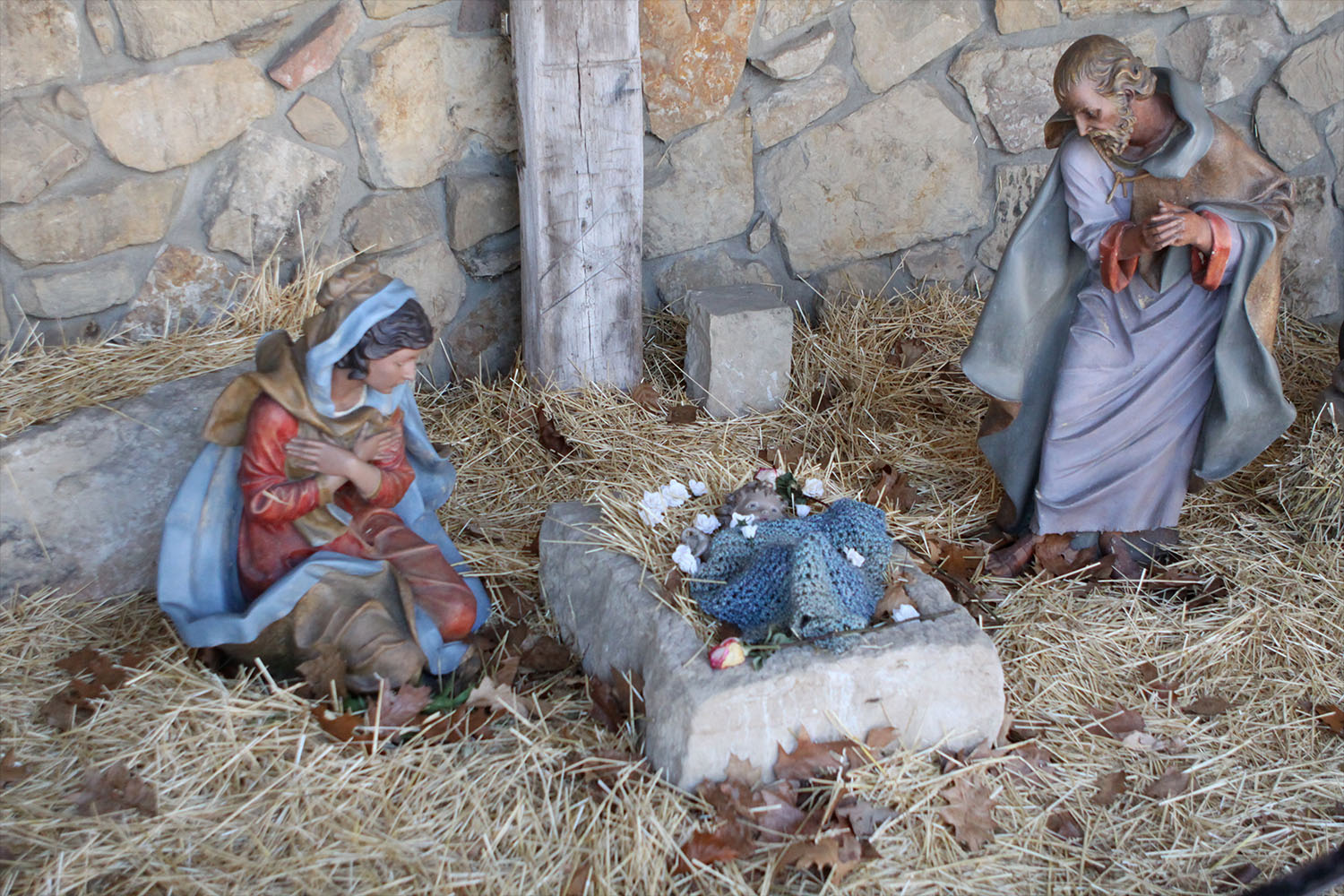 Near the Portiuncula Chapel and the Tomb of the Unborn Child stands a rough stone enclosure that houses a nearly life-size, year-round manger scene.

St. Francis of Assisi emphasized three devotions: the crib, the cross, and the ciborium (Eucharist). The Christmas crèche tradition originated with St. Francis, who staged the first nativity scene on Christmas Eve in 1223 while visiting the Italian village of Greccio.

St. Francis had received permission from Pope Honorious III to hold Midnight Mass in a cave near Greccio’s town square. “I want to do something that will recall the memory of that child who was born in Bethlehem, to see with bodily eyes the inconveniences of his infancy, how he lay in the manger, and how the ox and ass stood by,” St. Francis reportedly said.

St. Francis gathered a cast of live animals for the scene. He proclaimed the Gospel to the people of Greccio and then preached to them about Jesus’ humility and poverty. Coupled with the nativity scene, St. Francis’ preaching greatly moved the congregation, and from then on the idea of staging live nativities spread throughout Italy.

In Franciscan University’s crèche, the infant Jesus lies in a crib hewn from a single rock, reminding us that Christ is the Rock of our Salvation. In that crib lies the son of the God who “so loved the world that he sent his only son,” who “emptied himself and took the form of a slave, being born in the likeness of men.”

But never far from the birth of Christ is the sobering reality of why he came into the world. “He was known to be of human estate, obediently accepting even death: death on a cross.” And so, directly behind the crib, in front of the rough stone wall, stands a rugged cross—the throne upon which Christ reigns supreme, and the instrument of our salvation. “When I am lifted up, I shall draw all men to myself,” he said.

Next to the cross hangs an oxen yoke. The yoke symbolizes our freedom from the bonds of sin and death, and the Franciscan emphasis on penance and conversion. Before Christ died, all men were slaves to guilt and the consequences of sin. But Christ broke the chains of sin and death. In him, we become sons and daughters of the Father, able to live in freedom to love. He entreats us still today, “Come to me all who labor and are burdened and I will give you rest. Take my yoke upon your shoulders, for my yoke is easy, and my burden, light.”

Two tables stand in the corners of the crèche. On one, a water pitcher and basin symbolize the waters of baptism through which we become sons and daughters of the Father, members of the mystical body of Christ. On the other table sit a loaf of bread and a cup to represent the Eucharist, the reality of the eternal covenant: “He who eats my flesh and drinks my blood has eternal life, and I will raise him up at the last day. My flesh is food indeed, and my blood is drink indeed.”

So much is conveyed in the simple elements of wood, stone, bread, and water—indeed, the entire depth of the mystery of God’s revelation and his tender, powerful love for all humanity. In this simple scene, we witness his life poured out that we might have life everlasting.